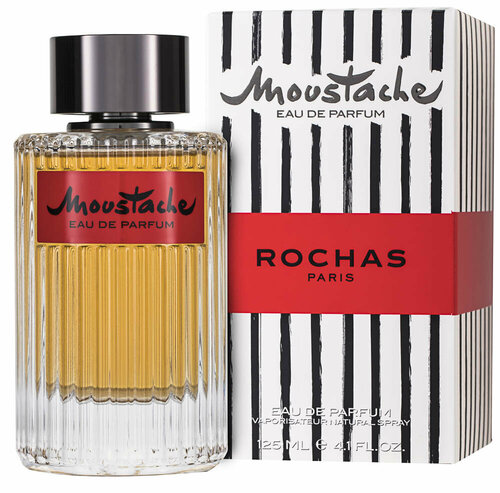 Rochas Moustache EDP is an amber woody fragrance for men that was released in 2018. It’s an affordable designer cologne that is often compared to the more expensive YSL Tuxedo. Since I own both scents I’m going to give you my honest thoughts on Moustache and how it shapes up to Tuxedo.

How Does Rochas Moustache EDP Smell?

The opening of Moustache is quite vigorous. Initially, I can smell the pepper, orange, vanilla , and benzoin elements coming through.

The pepper is the most immediately noticeable note. It bounces off my skin and smells spicy. Furthermore, the mandarian orange is also present. However, it doesn’t add a zingy burst like you’d expect. Instead, it’s a little more subdued, adding some fresh brightness to the pepper.

At this point, the vanilla is prominent as well. It’s undoubtedly sweet, but also has a warm, boozy quality. I suspect it’s working in harmony with benzoin to elicit this aroma because there’s no booze officially listed in the notes. Regardless, it’s a nice surprise.

Then, a smooth rose note begins to peer through. It’s quite elegant, and blended into the composition well. So well in fact, that even those who dislike rose will enjoy its presence here.

As the scent dries down, the pepper and mandarin orange start to fade away. They are replaced by cedar woods and earthy patchouli. These two accords combine to amplify the masculine character of Moustache EDP.

To summarise, the scent begins as a spicy, orangey, vanilla booze combination. It then dries down into a vanilla, boozy, woody blend with sprinklings of rose and patchouli.

I asked a fellow reviewer on Instagram what he thought about Moustache. Here’s what he said:

Love this stuff. My wife said it smells like a tailored suit in a bottle but without a tie and since then it’s been a staple for me.

My testing of Moustache EDP has revealed solid performance. I’ve found that it projects best during the opening, especially for the first few hours. Once it starts to dry down it sits closer to the skin, leaving a pleasant scent trail wherever I go.

In total it lasts around 7 hours on my skin. I typically reapply after 5-6 hours to get the best experience all day.

Moustache EDP works best in cold weather, moderate weather, and even weather slightly pushing warm. I’d avoid this in hot weather though and consider something more like Versace Dylan Blue.

The name suggests this fragrance leans on the classier side. Although I do believe you can wear this comfortably with a suit/tie/blazer, you can pull it off in casual situations too – especially if you’re a stylish man.

Many people in the fragrance community have noted that Moustache EDP has several similarities to YSL Tuxedo.

I have to agree – I think they are pretty similar. I won’t go into thorough detail about the parallels since I’ve separately reviewed YSL Tuxedo here.

However, I will say the following about the contrasts:

Furthermore, another fragrance reviewer had this to say:

This always draws comparisons to YSL Tuxedo, and rightfully so. A friend of mine has YSL Tuxedo and she let me smell the fragrance for comparison. Tuxedo is still more refined and has better quality, but it is barely distinguishable to an average nose.

Although there’s consensus these colognes are comparable, I do not think it’s redundant to own both.

Do you own Moustache and want a higher quality version reserved for special occasions? Try Tuxedo.

Do you own Tuxedo and want to wear the scent profile on a regular basis without blowing the budget? Pick up Moustache.

A true gentleman has a moustache, whether it’s a beard or moustache

In conclusion, although Rochas Mosutache EDP isn’t necessarily better than Tuxedo, it IS a solid fragrance in its own right.

Moustache vs Tuxedo is what Mont Blanc Explorer is to Creed Aventus. An affordable designer alternative versus an expensive counterpart.

There are differences in quality, no doubt about that.

But the performance is similar, and you are paying a fraction of the price.

Whichever you choose, rest assured knowing that Rochas Moustache EDP is one of the best value scents on the market right now. If you decide to pick it up, let me know what you think.

We want to hear from you. Let’s keep the conversation going in the comments and on Instagram! What are your thoughts on Rochas Moustache EDP?

Moustache EDP and YSL Tuxedo are both INCREDIBLE scents in their own ways. If you have the extra coin, go with Tuxedo. If you want to get as much value as possible, go Moustache.

I don’t own this myself but after reading the article and watching other reviews online I have added it to the list of ‘to-gets’. Sounds fantastic and for that price point wouldn’t want to miss out on the value!

Absolutely Matt. I actually bought Tuxedo first, then sampled Moustache months down the track. Very impressed with what it has to offer for under $100.