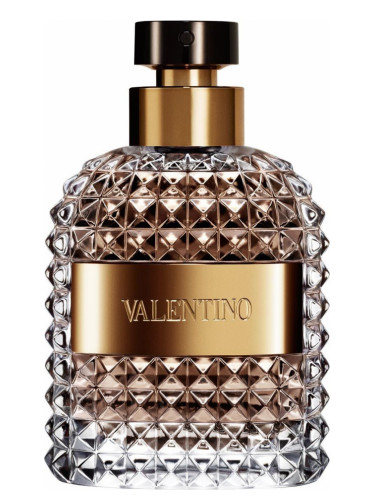 Valentino Uomo EDT is a cologne for men released in 2014. In truth, Valentino flies under the radar as a fragrance house. In my opinion their scents are as appealing as the biggest brands in the business – and Uomo is no exception. I’ve spent a lot of time wearing and testing this fragrance over the last few weeks. Accordingly, it’s time to let you know what I think.

Fellas, the opening of Uomo is about as delectable as it gets.

On first spray, Uomo smells aromatic, nutty, sweet and leathery. The sweetness comes from both the chocolate and hazelnut accords. However, the hazelnut also adds a distinctive ‘nutty’ texture.

In the early stages I can also smell fresh bergamot. It’s only subtle, but it brings energy and balance to the deeper notes.

Also present is leather, which is blended well amongst the gourmand aroma. Interestingly, it smells refined and fairly aromatic too. That’s because of the combination with a green myrtle note listed in Uomo. If you’re unfamiliar with myrtle, it smells slightly camphoraceous – comparable to eucalyptus.

As the scent develops, a powdery, floral iris note is revealed. Interestingly, iris isn’t even listed as an official note. In fact, its inclusion here gives me serious Dior Homme Intense vibes. And for the record? I love that cologne.

In addition, I can now smell coffee beans too. Although faint, the coffee does give its trademark roasted, bitter aroma in support of the iris.

As the scent fully dries on skin, most of the sweetness and nuttiness subsides. Uomo transforms into a predominantly powdery, woody, and leathery scent.

Is there such a thing as a powdery, leathery, almost boozy, chocolate gourmand? There is? Then Valentino Uomo is the picture in the dictionary under that somewhat overly specific term. I love this fragrance. LOVE. It’s fun, a little complex, delicious, and just brings a smile to my face every time I wear it.

From my testing? I rank the performance of Valentino Uomo as moderate.

For the first hour, Uomo projects out impressively by 3 feet from skin. After the first hour though, it sits closer to the skin. Overall, Uomo lasts about 8 hours from beginning to end.

Although Uomo has great longevity, it doesn’t project much after the first hour. If you crave greater projection, I recommend you carry an atomizer to reapply Uomo in the afternoon or evening.

Who can wear this, and when?

Valentino Uomo is undoubtedly for a mature man. I believe masculine, classy men aged 25+ will suit this cologne well. If you’re younger and looking for something similar, check out Salvatore Ferragamo fragrances instead.

Additionally, this is day and night-time appropriate. However, it’ll smell better when worn during colder months. Furthermore, Uomo is suitable for formal events, casual occasions, and romantic encounters. I’d go further and even declare this as office friendly if you go easy on the sprays.

Valentino Uomo EDT has been a revelation over the last two weeks. I can’t believe I only discovered it recently.

Therefore, I’ll be making up for lost time. Uomo is such a delicious combination of leather, sweetness, iris, and woods. What’s more? It just drips with class too.

Guy, this signature scent worthy. I strongly encourage you to try it out.

I want to hear from you. Let’s keep the conversation going in the comments and on Instagram. What are your thoughts on Valentino Uomo?

So glad I discovered Valentino Uomo recently. This one has been SO GOOD. What are your thoughts on it?