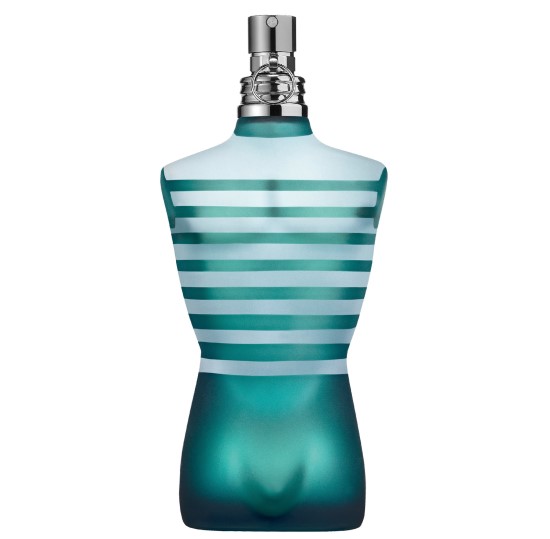 Jean Paul Gaultier Le Male has been around for as long as I can remember. Worn by stylish fathers everywhere, this aromatic scent is well known due to its peculiar, provocative bottle. Additionally, nobody can deny the lasting success that Le Male has enjoyed. However, I believe it’s now a shadow of its former, brilliant self. Read on and let me explain.

On first spray I’m greeted with sharp, aromatic energy. The lavender, mint, and artemisia are the obvious culprits. The combination offers a green, slightly spicy, and softly floral aroma. Additionally, some herbaceous undertones are present too.

Accompanying this mixture is a vanilla note, pulsating up from the base. It provides a robust sweetness, persistent throughout the entirety of the fragrance.

This progression continues as Le Male commences the dry down phase. The aromatics continue losing their earlier vigor; and the cardamom becomes more pronounced.

However, I start to witness the subdued amber and woods make a contribution. They supply a dense, manly facet in the background.

Furthermore, I don’t hate the scent. I think it smells okay.

The issue is the outdated nature of the aromatic composition. After spending time with this fragrance, its unsurprising it was released in 1995. Those who have sentimental memories of this iconic aroma will continue to enjoy it. Fragrance newbies, however, will feel like they’ve stepped in a time machine to the 90’s.

This reviewer had a few things to say:

It’s an aromatic vanilla with a soft spicy odor, with the freshness given by the aromatics: lavender and mint. Unfortunately the performance is quite bad and it’s kinda pricy.

Performance isn’t what it used to be

Back in the day, original formulations of Le Male featured beast mode performance. Many would rave about 12+ hours of longevity and projection.

The glory days are gone.

Over the years, reformulations have caused this scent to quell what tremendous performance it once had.

These days, expect closer to 7 hours of total longevity – with solid projection from skin for the first 4.

Only suitable for mature men

As indicated earlier, Le Male embodies an old-school, dated vibe. Therefore, I only recommend this to men with a lasting bond to Le Male – aged 35 or over. This is a similar age bracket to whom I’d endorse a classy fragrance like Creed Viking.

For guys over this age, Le Male is quite versatile. You can wear this in any casual situation, or on dates. Additionally, it’s office friendly too.

Due to some of the deeper notes, avoid spraying in summer. Although I give the green light in any other season – day or night.

There you have it, my unfiltered thoughts on Jean Paul Gaultier Le Male.

An iconic cologne in a risque bottle, Le Male has been adored across the globe for decades.

Although still smelling okay, its aromatically sweet composition has become increasingly obsolete as time goes on.

I think there are better options out there these days – especially for men who don’t have nostalgic attachment to the cologne.

I want to hear from you. Let’s keep the conversation going in the comments and on Instagram. Do you agree with my thoughts on Jean Paul Gaultier Le Male?

What do you think of my opinion of JPG Le Male? Did I miss the mark or do you agree? Let me know, keen to get a discussion going.

People will be wearing Le Male decades from now. It is a classic fragrance that will always be a go to scent. Although the term is overused, JPG Le Male is an iconic fragrance.

I have no doubt people will continue to wear it. It’s a popular seller and doesn’t seem to be going anywhere.

I get your opinion but I have gotten compliments and a raise in my pay while wearing cheap outdated fragrances!! In the world outside of fragcom I’m able to get away with wearing a fragrance like le male, and I wear this fragrance to work and my co workers love it ! Young and older!!! Would I wear this at some fragrance convention in Paris? No!!! I’m 53yo and I have cheap to niche fragrances and I enjoy and love them all!! I have 20$ bottle fragrances and I have 500$ fragrance and I believe that all fragrance designer or Niche, new and old, should be worn if you like it!! If I’m alive 20 years from now and if le Male is still offered to the public, I will still be wearing le male!! Thank you MFK!!! Even your past creations are fabulous 😍

Appreciate your honest views Darron. The title is clickbaity and in practice it’s more nuanced. I’ve no doubt that you’d still get compliments wearing this, and any blokes that have been in the fragrance game for a while will continue to love it, I’m sure.

I review everything here. $20, $500, I don’t discriminate. Like yours, my collection is extremely broad in the price department. Guys are doing themselves a disservice if they take a narrow view of how relative the price tag is to how incredible a scent smells.

5
0
Let us know your thoughts in the comments.x